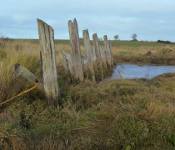 When we take time out from winter maintenance on SchoonerSail’s schooner Trinovante we often take a walk beside the saltings along St Osyth Creek. They are littered with history if only you know what you are looking at. We had been wandering past this old wooden quay side for years but only recently found out a little more about it from local shipwright Alan Williams.

Alan says it it likely the crumbling, soft wood pilings are Victorian and probably date from sometime after 1800. Few big, softwood timbers like these were imported before this date. From 1800 onwards however, imports from places such as Russia became common. 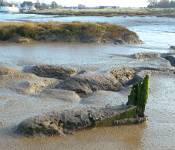 The sternpost of the derelict sailing barge 'Bluebell'

Barges docking at this quay were engaged in a circular trade, usually bringing horse manure from London to be spread on local fields and then loading for the return journey with agricultural produce; mostly grain and straw for the London horses. In between cargos the holds had to be washed clean before the ‘clean’ cargo could be put aboard. Alongside the old barge quay are the imprints of two square ponds dug into the mud which we had not noticed until Alan pointed them out. These would have filled up at high tide and held back water for cleaning the holds.

Towards the end of the sailing era it was common for boats to end their days at the top ends of creeks and in disused barge docks. 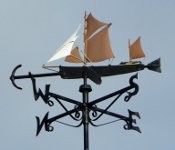 A Thames Barge windvane points into a North Westerly wind.

This dock is no exception and holds the remains of the barge Bluebell which ended her career as floating storage in St Osyth Boatyard before sinking in the dock sometime around the 1950’s.

Only the stern post is still visable and will soon dissappear below the surface of the mud, leaving the empty barge dock to the shrill cries of oystercatchers and redshanks as they feed between the tides.

Check out our Tall Shipssailing holidays in Essex