On The Slip Way – Cockle Fishing Boat The ‘Wash Pilgrim’ 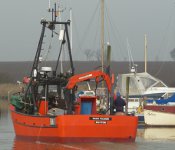 Right now sea food is top of many people’s agenda with popular series on the television such as the ‘Great Fish Fight’ encouraging us to eat a wider variety of sustainably sourced sea food. For some reason they rarely think of the humble cockle.

The bright orange colours of the Cockler, Wash Pilgrim, are a familiar’ Thames Estuary’ home-coming sight for the crew of Trinovante. 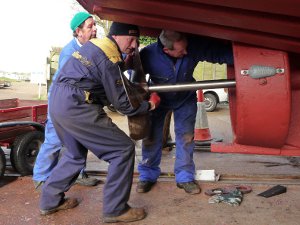 The Wash Pilgrim gets a new prop shaft.

The Wash Pilgrim launched in 1992 is a purpose built boat designed for cockling or at a push fishing mussels and shrimps. The owner, Trevor Lineham, is a Boston man who came down this way twenty years ago to work the cockle beds between Brightlingsea and Shoeburyness .

Quietly spoken Trevor has been cockle fishing his entire life. When I asked him what age he was first on a cockle boat, he stopped for a moment and then said

‘I was about four. 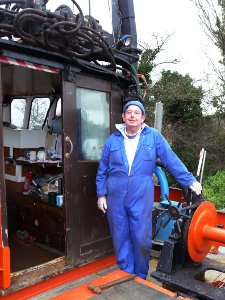 We were anchored up and I remember my dad telling me not to worry when the tide turned and the boat swung round on its anchor’.

As soon as Trevor left school at 16 he started fishing full time. In 1968 when he was 18 he bought his first boat.

In the 40 odd years since then cockle fishing techniques have changed from laborious hand raking in the sand to relatively high tech mechanical dredging.  The old hand raking does still go on today in some areas, mostly as a way of preserving stocks and one of the photos here shows Trevor hand raking relatively recently.

In the last couple of years Trevor has handed the skippering of the Wash Pilgrim into younger hands  but Trevor himself still gets actively involved in the annual maintenance  on the St Osyth Boatyard Slip. 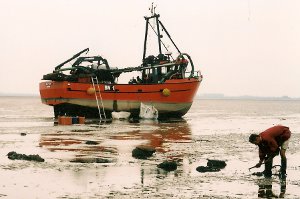 Trevor hand raking for cockles from the Wash Pilgrim.

Hand raking involved going out on the tide and drying out the boat on the sands and literally raking the cockles up with a hand rake. Trevor remembers between two and four people worked a boat. Any more than four ment they ended up working an area to far from the boat and then  having to haul the heavy cockles back a long way. 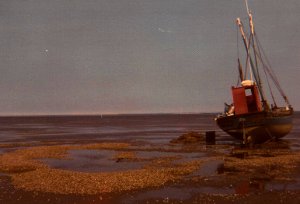 You can clearly see the heaps of cockles thrown up by ploughing in this picture.

After that they started ‘ploughing’. With the boat anchored from the stern, the fishermen would motor round and round in ever decreasing circles by hauling in the anchor chain about 7 feet on every completed circle. The prop wash blew all the cockles into a heap in the middle to be scooped up as soon as the tide went out. I asked Mr Lineham how efficient this was and he said it worked really well but was soon made illegal.

The main change for the fisherman when the dredging came in was that the boats didn’t have to dry out on the sand any more. Now the skill is in working the falling tide right until the last minute and
then knowing the fastest route off the sands. 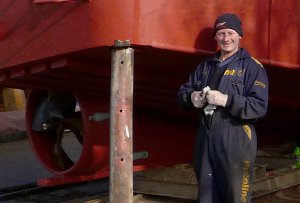 Tony the current skipper of the Wash Pilgrim.

are expected to have a detailed knowledge of the vast areas of ‘the flats’ as the sand banks in the Thames estuary are known.

Trevor said ‘these days you don’t want to get your boat ashore although occasionally we do still dry out’.

Cockles are loved in Spain and almost all the catch now goes for export via a canning factory in Boston. Trevor rates the cockles highly himself and says he always eats a few if he is working a good
bed. He likes them cooked traditionally, boiled
and eaten with a little vinegar. On Trinovante
we have tried fresh cockles and suggest cooking
them like mussels in white wine, they are just
as good. 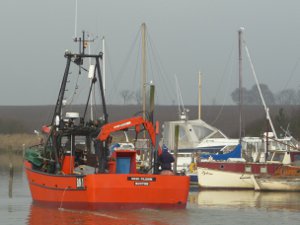 These days the cockle dredging is tightly controlled by the Kent and Essex Sea Fisheries. A sample is taken in the spring and quotas for the coming season are allocated.  Roughly  a third is for the fishermen, a third left to breed for next season and a third for the birds and other sea life.
Trevor thinks this seems to have worked well for the last twenty years and said ‘ The fisheries are well run here. Of course there are all sorts of rules and regulations but without them the fisheries would probably fished out’

More about the cockle fisheries and a map.

Read more from What's On The Slipway?