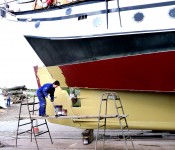 Not much news from the Trinovante lately you might be thinking looking at our blog.

Let me assure you lots has been going on, but it has been so frantic there has been no time for blogging.

Our schooner went on the slipway at
St Osyth Boatyard on the 21st March. 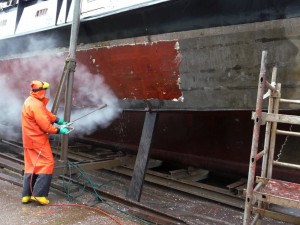 This year we decided to have the under water area ultra high pressure water blasted and sprayed with paint. After asking around a bit for recommendations and then having several conversations with ‘Mel’ from JMK ultra High Pressure Blasting we took the plunge. 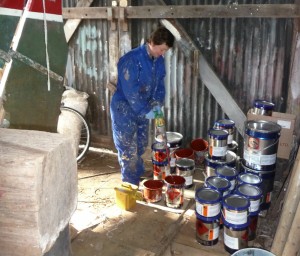 You don't want to be stirring this much paint by hand.

Everything went smoothly. JMK arrived when they said they would and did a very through job. We were amazed at how clean the operation was, compared with grit or slurry blasting, and how effective.

In no time at all the boat had been blasted, Mel and his team had cleaned up and they were gone.

Now for the only snag. Mel had forewarned us on his site visit the previous week that spraying was not an option because the risk of paint spray spreading to the boatyard owners house and the boats close around us. Either we rollered the paint on or we delayed the job for another year. We didn’t want to delay so we went for it. Fortune favours the brave, sometimes. For us the weather over the following two weeks was perfect for painting – warm and dry. 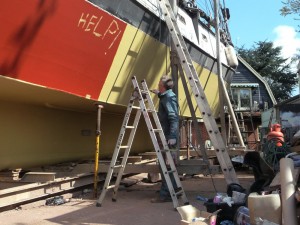 It meant painting the boat 8 times in all to get the film thickness though!.

Howard who has sailed with us several times over the years and lives locally made the mistake of offering to give us a hand. The look on his face when he asked us when we were launching and saw how much there was still to do said it all. 14 non stop days later he was still working with us. Thanks Howard, you definitely gets this year’s volunteer of the year award. 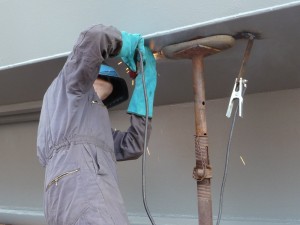 It seemed like an impossible task to get the boat ready on time but then it always seems like that.

This paint job was on top of all our other jobs such as varnishing the cabin sole, welding on new annodes, repacking the stern gland, replacing the nylon bearings in the rope stripper, finishing the lining on the forward crew coach roof…..

Those of you who have booked will be relieved to hear at this stage that Trinovante is now lying at anchor in the Colne and the last few jobs are being wound up as I type this. In a minute John and I are going on deck for a well earned beer as we watch
the sun going down. I’ll leave you with a couple of
photos (taken by George Brown) of Trinovante being launched and heading
down the creek. 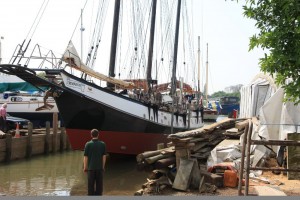 Trinovante is launched on a big spring tide.

A tug from the boat yard pulls the head round the tight bends in the creek.