This weeks guest blogger Richard Sibley runs the Tall Ships Gallery. His web site has a large collection of tall ships images and you can also buy online.
He also has some good photos of our schooner Trinovante racing in the Tall Ships North Sea Regatta.

I can think of many reasons to visit Hartlepool, but none better than to see Britain’s oldest warship afloat the frigate HMS Tricomalee and to photograph the gathering of the Tall Ships for the North Sea
Regatta 2010.

And have you heard the dark tale of the ‘Hartlepool Monkey’ washed ashore one night from the wreck of a French warship. Wearing a military uniform he was captured by the local fisherman, taken for a spy found guilty and summarily executed! ‘Monkey Hangar’ now being a common term for a Hartlepudlian and H’Angus the monkey the name of the mascot for Hartlepool FC.

After a tour of the Trincomalee I was up bright and early the following morning to catch the tide for the start of the North Sea regatta and not a monkey insight.

As the armada of sail prepared to embark, we set off into the early morning sun aboard the ‘Flamer II’ with little evidence of the strong offshore winds suggested by the forecast and four hours to kill before the race. Our skipper John Batty suggested a bit of fishing to pass the time so we headed for a local wreck and by 11 O’clock I had landed a 5lb Cod and a bucket full of Mackerel.

By now the boats were gathering on the horizon for the race start and time began to move swiftly, with the skipper keen to drift over the wreck once more the photographers were getting edgy! We had spotted Stad Amsterdam inshore under full sail, preparing to tack and head for the line. With Astrid, Pelican and Stavros hard on her heals we
stowed the rods and set off in pursuit. 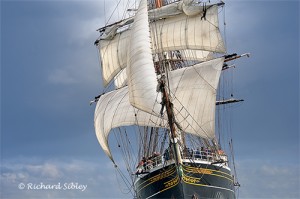 The fleet was spreading out rapidly as we passed under the bow of the Stad Amsterdam, our shutters racing, when I suddenly caught site of a small dark figure way up in the rigging and my thoughts went out to the unfortunate monkey on that dark night many years ago, I wondered if his spirit was looking on. 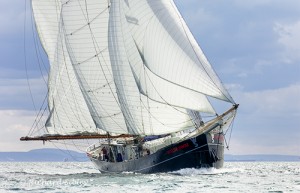 Dropping astern we headed towards the ‘Wylde Swan’ a 1920’s herring hunter recently converted into the worlds largest two masted topsail schooner, racing in her first season as a Class A Tall Ship. As the wind speed began to increase we gave chase our radar indicating she was making 12kn. Not far behind was ‘Trinovante’ flying north under sail with a bone in her teeth and then the 4 masted schooner ‘Santa Maria Manuela’ Portugal, sister ship to the ‘Creoula’ and one of the ships of the Portuguese “White Fleet” that fished the Newfoundland Banks. 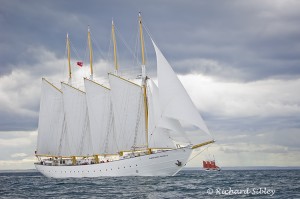 The Santa Maria Manuela - you can just see our schooner Trinovante in the background.

Sadly “the long trick over” and the weather taking a turn for the worse as a heavy rain shower cleansed the decks of fishing debris, it was time to head for home. But if you’re ever up in Hartlepool make a wish for the monkey and book a trip with John Batty, skipper of “Flamer II” and fisherman extraordinaire.