The Fishing Smack Pioneer On The Slipway 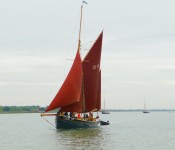 SchoonerSail’s schooner Trinovante is booked on the St Osyth Boatyard Slipway for antifouling in March. Before us the fishing smack ‘Pioneer’ is in for routine maintenance. Pioneer looks like a brand new boat and needs a minimum of routine maintenance; a bit of recaulking here, a seacock checked there and some new paint. In fact Pioneer was built way back in 1864 at Rowhedge.
She was one of the bigger Essex fishing vessels and voyaged further afield than most. After a life spent sailing arounbd the British Isles, to and from the deep sea oyster fisheries on the Tershelling banks in the Dutch side of the north sea and dredging scallops in the channel, she lay for 60 years wrecked on the Mersey Island shore. 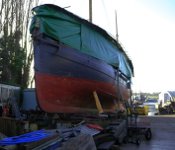 The Pioneer on the St Osyth slipway

In 1998 she was rescued and literally dug out of the mud by the Pioneer trust. Jim, one of pioneers current skippers remembers playing on the wreck when he was a child.
Relaunced in 2003, the pioneer now takes groups of young people on sailing holidays in the Thames Estuary and further afield. 3 years ago she returned to her old haunts off the North Holland coast to join a dutch Maritime festival and go dredging once again. The Tershelling bank no longer exists having been eroded over time and where it once was is now a busy intersection in the modern shipping lanes. However, with a local retired Dutch fisherman onboard it was possible to try the dredge inthe Waddenzee for old times sake and get a haul of a few razor clams. 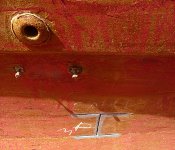 A thorough hull fitting, ready to recieve a new annode and a butt seam raked out for recaulking.

When I asked Jim if there had been any particulally notable groups sailing on Pioneer this summer he said a group of profoundly deaf young people stood out in his mind. He was impressed with their level of concentration and said ‘They were amazing. You only had to show them somthing once and they had got it.’

The photo of Pioneer sailing (at the top of this post) was taken in the Colne at the end of 2010 while we were at anchor on Trinovante.