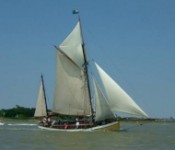 
Towards the end of 2004, Michael Emmett and Kevin Murphy were talking in the bar of the Queens Head, in Maldon, lamenting the passing of yet another of the old time bargemen. A comment was passed along the lines of “That’s another part of the knowledge gone”.

After a few days discussion this led to their decision to, not so much write a book about sailing, as to collect all the knowledge
into one volume so that it can be shared by future generations and
hopefully help keep traditional vessels sailing using the traditional
tools and skills in the time honoured way. 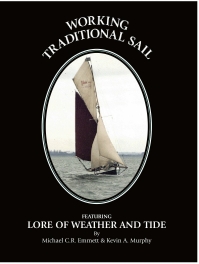 Kevin’s maritime heritage comes via his uncle, a fisherman on the west coast of Ireland and an aunt whose family at one time owned and worked the Galway hooker American Mor. In 1986, he quit his job in a London bank to become Mate on the Thames sailing barge Reminder. After two seasons, he passed his sailing Bargemasters examand spent the next twelve years as master of Reminder as well as being relief master to over 50% of the barge fleet.
He also spent three winters working for James Lawrence Sailmakers of Brightlingsea. This work included working on the complete overhaul of the sails of H.M.S. Warrior. He now lives in Devon where amongst other things he has been the skipper of the Tamar barge ‘Lynher’, one of the last two of this type of craft still sailing.

Michael comes from a family whose ties with commercial sailing on the River Blackwater can be traced back seven generations.
He was introduced to sailing on his fathers’ boat Topsy and later
shipped aboard the Claydon family’s fishing smacks.
One of these he bought from them when just fifteen years of age. In
1980 he had Ostrea Rose built for his business – the Maldon Oyster
Fishery. 1999 saw the sale of Ostrea Rose and the building of her
replacement Black Rose, which is available for charter work and
sailing holidays.

The authors endeavour to cover in detail the many aspects of rigging and seamanship that developed over hundreds of years and have been largely forgotten and lost in the passage of the 20th century. Both authors were fortunate enough to have worked alongside men who earned their living from commercial sail. The authors believe that preserving these skills is important, not only for people who sail for pleasure, but also because it is conceivable that, due to declining oil supplies, man may have to return to commercial sail.

The first section of the book follows a crew, which includes the reader, on a voyage aboard a sailing vessel. It describes in detail the methods of getting underway and setting the gear in various wind conditions, through to anchoring at the end of the voyage. Along the way the reader is shown many tricks and tips that the authors had passed down to them by men who worked in cargo carrying and fishing under sail alone.

Also contained in this section is a chapter on weather and tide lore. In the days before weather forecast broadcasts, the seaman learnt to foretell the weather by what he could see in the sky and on the water. Much of this being passed on from generation to generation verbally. This naturally led to the creation of rhymes and sayings, to make learning easier, such as
“When the lofty hill, the mist doth bear
Let the mariner then for storms prepare”

The second section contains detailed explanations of the gear, terminology or actions, which are partly instructive, partly historic, backed up with clear illustrations and photos.

Order this book from www.traditionalcharter.co.uk