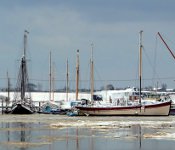 This week has seen the return of heavy snowfall and sub zero temperatures. Outside work on our schooner  Trinovante has been brought to a standstill but the creek does look beautiful in the snow. For a few days the creek itself has had large amounts of ice in it and even some small ice floes. It’s rare for salt water to freeze here in the winter.
We’ve had the fore topmast down on deck for routine maintenance and to fit a new LED anchor light.
When we anchor in the summer the new light will save us the job of 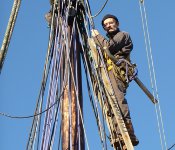 John shackling on the topmast rigging.

filling, lighting and hoisting the old parrafin barge light we have been using up till now. Not to mention time spent trimming and replacing wicks and chasing round foreign ports trying to buy parrafin. The nostalgia of the old parafin anchor light will be gone but the light itslef will stay on its shelf in the hold as a stand by.
John, Trionvante’s skipper had one short spell working aloft shackling on the topmast rigging just before the snow set in. With eyes streaming in the bitter easterly wind and hands quickly starting to feel like lumps of meat he soon decided to wait for better weather. However he said it gave him a renewed respect for the generations of seafarers that have caught fish and carried cargos around our coasts all year round under sail 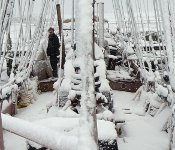 Snow conditions on deck this week.

and those tall ship sailors that manned the big square riggers rounding Cape Horn in winter.