A sailing holiday amongst Norway’s Fjords and Islands 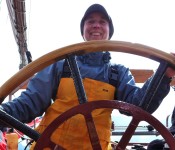 A guest blog by Michelle Marshall

This was my second voyage on Trinovante. Last year I sailed from Bodo to Trondheim so this year I thought it would be nice to see a different part of the Norwegian coast. Also this voyage had the added bonus of an offshore passage something I have enjoyed on previous trips when I have sailed on Brixham trawlers. This blog post carries on from where Neil Ashdown left off with his post ‘The Saga Of The Passage To Norway‘.

Check out SchoonerSail’s summer 2011 sailing holidays in the Fjords and Islands of Norway the Arctic Circle and the Netherlands. 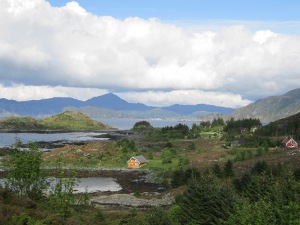 The view from the centre of Silde, Norway.

After a good day sail our next destination was the island of Silda that we described as the Norway’s garden of Eden. We explored on foot the island on foot venturing from the rocky mound in its centre to the green meadows and the classical Norwegian wooden houses that lay nearer the shores that had beautiful gardens blooming with spring flowers.

An Evening At The Edge Of The World 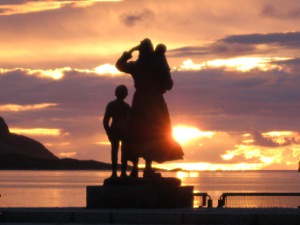 Following this we continued our journey north to the town of Fosnavag. From the harbour looking out to sea it looked like the distant water was a tumbling waterfall falling over the edge of a flat earth. We were lucky enough to experience a stunning sunset over this scene in the company of the town statue of ‘the Fishermans Wife and Children’ who are looking eternally out to sea for the return of her husband and their dad. 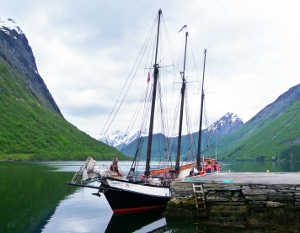 The schooner Trinovante alonside a quay in Norangsfjorden.

We sailed inland on the next day through Hjorund Fjord and Norangsfjorden up to the village of Oye that lay at the top of the Norangsfjorden. Here there was an entirely different climate to what we had experienced on the coast. There was still lots of snow on the mountains and the following morning we noticed a fresh dusting of snow on their peaks. It gave us some fantastic scenery and we could easily imagine trolls living among the rocks. 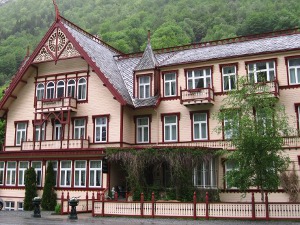 Oye was opened up for Victorian English Mountaineers by CW Patchell and the Union Hotel, which is decorated in period artwork, has an old world charm about it. In its heyday it attracted many famous visitors which included Sir Conan Doyle, Kaiser Wilhelm, Edward Wilhelm, Karen Blixen and Ronald Amundsen. Locals we met reeled off a list of other manes including Karl Marx, Coco Channell and the composer Edvard Greig. 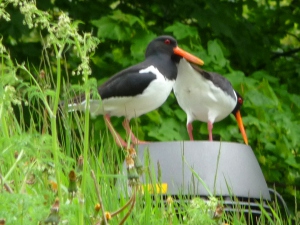 Trinovante was able to moor up alongside a disused ferry quay in this fjord and we were lucky enough to have this place to ourselves as this place is off the beaten track away from where the big cruise ships go. Our only visitor here was an aggressive oyster catcher, who used to swoop down on us every time we went ashore. 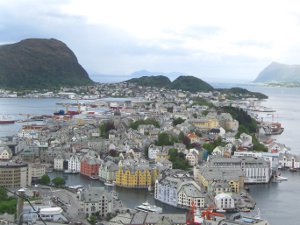 Our last port of call was the pretty art nouveau town of Alesund. The Hurtigrute ferry stops here so tourists are well catered and this was the opportunity for the crew to rush off to buy presents for friends and family. We did well and returned clutching treasures such as a hoard of Viking tea towels, Norwegian jumpers, model trolls and fridge magnets shaped like boats.

As we left the boat some of us had our log books filled in by John the skipper. It turned out that we had sailed a considerable distance of 846 miles since we left Ipswich.