Fjords and Food – a Gastronomic Discovery on a Trinovante Sailing Holiday 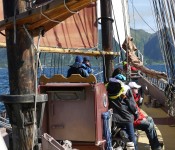 By Stuart and Sarah

Stuart and Sarah first sailed on a ‘learn to sail‘ weekend
from Ipswich and then on one of SchoonerSail’s
sailing holidays in the Netherlands. 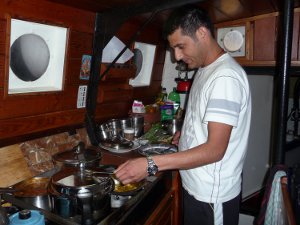 Ajay from Team India kicks off with a fine curry.

This was our third voyage aboard Trinovante, but the first on the Norway legs. We were looking forward to seeing the wonderful scenery of Norway, but had not expected to be also treated to a tour of world cuisine thanks to the talented crew.

Five Brits (ourselves, John, Su, and Dave) were joined by Team Italia (Ornella, Enrico, Daniele), Team Sweden (Mats), and Team India (Ajay). Our first delight was cooked up by Ajay bringing the spices of the East below decks with a curry night
and Chai the next day. 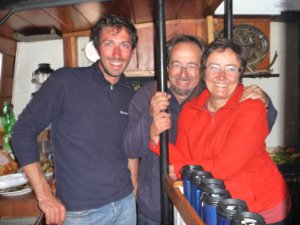 Team Italia, Enrico, Ornella and Danielle, take over the galley.

Ajay also was our top fisherman supplementing John’s Cod with a plethora of Mackerel. From Line to plate in less than an hour – difficult to beat, though Team Italia put up stiff competition with two evenings of bella nosh. Pasta, freshly caught cod and home made Birthday dolce (secret recipe) were all washed down gratefully with several bottles of duty free Chianti. Made all the more fun by ongoing English /Italian language lessons. 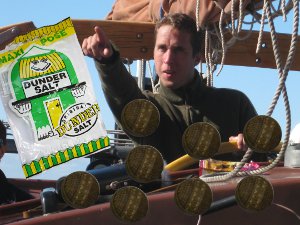 Is this a Dunder Salt which I see before me? Mats from Team Sweden maxes out on Dunder Salts.

The British Isles flew their respective flags also with bangers and mash (UK), and Potato Cakes (Ireland) making appearances, plus the much feted Marmite on toast.

However, all fades into insignificance compared with Mats’ attempt to break the world record for Dunder Salts eating – ammonia-flavoured troll droppings, anyone? 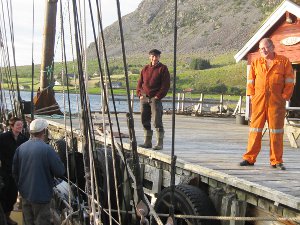 The brothers Bjorn and Ogsa from Botnane welcome the schooner Trinovante.

On top if this some splendid, varied sailing – gentle along the fjords, and an exciting fast passage around the Stad headland – as well as getting a chance to put the new ‘Fishakker’ sail through its paces – though we made a pastrocco of it several times!

The scenery was stunning, and we moored or anchored in a series of small harbours and bays keeping our eyes open for wildlife and Trolls.
Sharing a beer on deck with the delightful brother owners of the Botnane quay as the nordic sun slowly sank over the silent fjord will be an enduring memory (as will the gift of the antlers!). 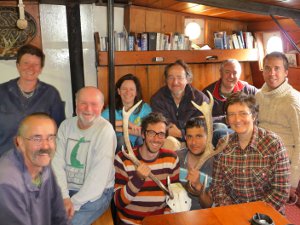 The whole Trinovante team on their last morning.

Norway has some of the most astounding coastline you will ever see, and seems like a land steeped in history and myth. Viking graves, next to beautiful wooden houses, tucked away in fjords (some 500m deep). We all remarked that it was like sailing through Tolkien’s Middle-earth, and there will be a commissioned blog later this year on Tolkien and Norway to add to the Trinovante encyclopaedia.