May The Foresail Be With You. 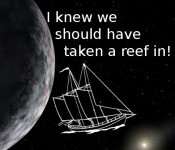 If the schooner Trinovante sailed into the Star Wars universe she would be on the side of the Rebel Alliance. None of that grey aluminium, gleaming panels of a dull, manufactured Imperial vessel. She has been honed and hand-crafted from so many parts- each co-opted, re-used, re-purposed, re-made into the exact requirements. Nothing wasted, designed from bow to stern, every part a perfect fit for its role and purpose. X-wings were like that, fine-tuned and tweaked by the Rebels to take on the latest model of Tie-Fighter.

I was co-opted and tweaked myself today – I became another part (humans are essential parts to any boat). I sat in the bowsprit and became the eyes of the Trinovante for an hour. Maybe it was two – I lost track, the Arctic Sun is so bright, so high, so un-ending, it sends my time-sense spinning.

The bowsprit is over the water, out beyond the fore-deck, green sea racing beneath my slatted bench. 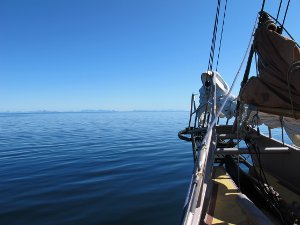 If I was going to push the metaphor that would make me R2D2 (perhaps a bit taller, I admit, but made rotund by my neon Arctic weather suit). I sat and looked out for buoys, sticks, and anything else in our path, as Trinovante slid on through calm seas. Her usual gaze was filled by her vast white fisherman’s sails, filled with a breeze.

We moved silent as magic in the barest touch of wind. 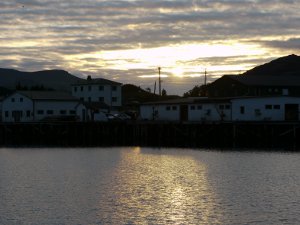 Midnight sun inside the Arctic Circle.

Instead of suns and asteroids we passed alien islands made of towering spires of dried out lava growing moss and Rorbuer (red fishermen’s houses).

We landed on one last night – pulled in beside a few pine fishing boats, hibernating over the summer. It was another world. At midnight we looked through the portholes to the thick gold sun hanging above the fire-peaks of the mountains, lighting the varnish inside the cabin. 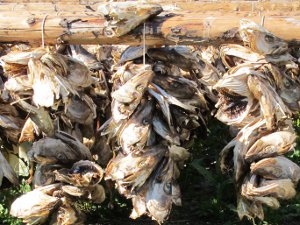 Fish heads drying in the Lofotens.

We stared un-comprehending at the dried out cod-heads, hundreds, hanging on racks above our heads. We could not understand. Has anyone eaten dried cod head? Who does? Why? Maybe it is shipped through some galactic whirlpool back to the Star Wars universe. Perhaps it supplies the Rebel Alliance fleet. Perhaps that’s what they eat out there.

Laura Watts is a writer, poet and ethnographer.
She is assistant professor at the IT University
of Copenhagen. She researches and writes about
technology, seascapes and the future.
For more info see
www.sand14.com

Listen to more ‘breathing’ singing as featured in the ‘Aliens Sing To Us’ Video,

or check out the artist, Curt Cloninger’s really interesting website.

Or even have a look at one of our sailing holidays