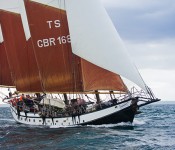 By Trinovante crew Ben Brooking with additions from Lyn Walby

Adventures on idyllic islands and feasting ashore on wild berries on one of SchoonerSail sailing holidays in Norway.
Plus some sailing of course!

Check out our sailing holidays. 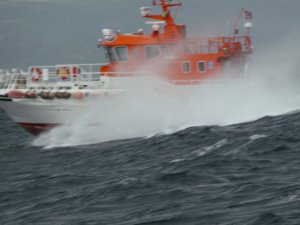 Sailing up to Narvik was a cracking run with the gaff sails goose-winged much of the time. An added interest was the lifeboat coming out.
The Norwegian lifeboat service, Reddningsklappet, is run on a different basis to the RNLI in the UK. In Norway leisure boaters can pay to be a member and get an annual allowance of time free. After that, or right from the start for non members, an hourly fee for call outs is charged.

The crew of Trinovante have been lucky enough to be given a guide tour of a Norwegian lifeboat in the past. 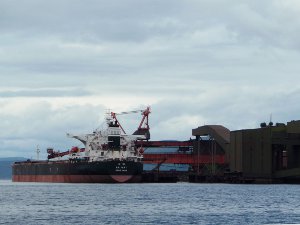 Narvik has only existed since 1902 when it was built as an ice-free port for Sweden to export iron ore from. The huge iron ore cargo ships were very much in evidence, Several were anchored around Narvik waiting their turn to load while one loaded at the massive plant which extends halfway round the harbour.

The whole crew trooped off to the Red Cross War Museum on our arrival. It was full of harrowing and horrifying information about the events of World War II when so many ships were sunk in the harbour, and the entire town was virtually burnt down as Germany and the Allies battled over
control of the iron ore. 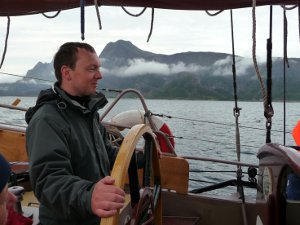 If I ever hear the word Fishermans Topsails again…

Like a kid in a sweet shop I’d kept pestering Su and John at each of our previous anchorages to go ashore and explore each Swiss-Family Robinson-esque island we encountered – I had plenty to choose from along the Norwegian coastline.

After a while they suggested that they would dedicate the Lofoten island of Skrova as ‘my’ island (although I think they’ve already made it a regular stop).
So, on the first Saturday of our voyage, after some patchy winds (previous crew with Su and John will
be familiar with the concept of “Fisherman’s Up,
Fisherman’s Down” days, referring to repeatedly
re-arranging Trinovante’s top-sails until your hands
are sore!) we put into the harbour on Skrova. 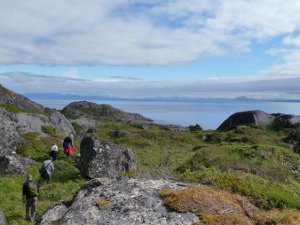 Walking ashore in Norway on the island of Skrova.

The following morning, Sunday, we awoke to a chilly start but with the sun shining through the early morning mist to show off the Lofoten coastline at its best.

We all set out with coats and jumpers for a trek around the island (from a distance it looks like a slightly unappealing heap of scree and rocks, but once on the island you realise it is far bigger and more interesting than you would initially think).
Quickly we realised why all the Norwegians we met were far less heavily dressed, as we shed our outer layers in the warm sunshine. 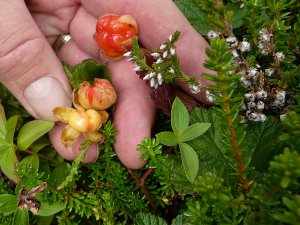 Our walk revealed the many interesting features of the island. Wandering through the hills and valleys we saw Sea Eagles soaring and orchids, rare in the UK, growing widely. The crews of the Trinovante are rarely to be found missing out on a new food experience and across Skrova we found (and subsequently ate) huge numbers of wild berries including Bilberries, Blueberries, Lingenberries and a type of berry which I had not encountered before – the Cloudberry. The taste is quite distinctive, tasting similar to peach melba yoghurt. 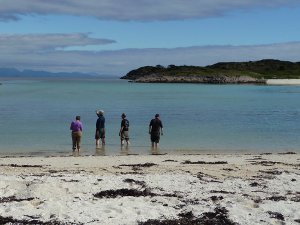 Paddling In The Arctic Sea

Further on we came across a picturesque beach with perfect white sand. Being good Englishmen one-and-all we took off our shoes and socks, rolled up our trouser legs and waded out for a paddle. This confirmed the idea that, despite beautiful appearances, the sea in the Arctic Circle is most definitely not for swimming in.
Later that afternoon we left Skrova and continued our exploration down the dramatic Lofoten islands.

Read the next part of this sailing holiday in Norway written by Paul and Lyn and see Ben’s wildlife photos.