The Saga of Earl John’s Voyage to Alesund. 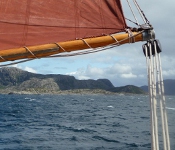 Taken from the 11th century Norse saga: The Saga of Earl John’s Voyage to Alesund.

There is a wealth of information on the web about the sagas that inspired this one, for instance the saga database 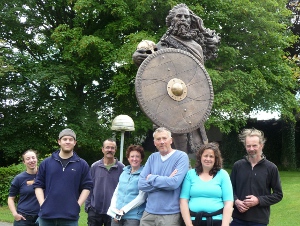 The crew stand before a statue of Earl John in his prime.

Earl John’s boat sailed to the island the Norsemen call Sandshamn.
His captain, Su, looked at the island and said
“it seems to me that this is a good place
to stay; there is a mountain to climb and fish in the sea” 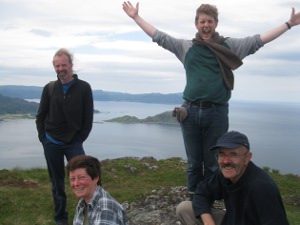 Then they sailed to a fjord where the water was calm
and so went fishing; but after a little time they had not caught any 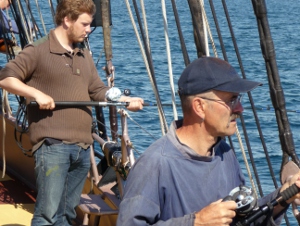 John said: “I think we might not find fish here,
this may become boring”
Su said to him: “I have been bored of this for some time”
So they moved on to another fishing ground

As they arrived at the new fishing ground Oaf Neil made a verse:

Su said to him:
“You make this verse but you have not caught any cod”
Oaf Neil said:
“We have not yet but we may”

And they caught many cod fish, as the Norsemen call them. 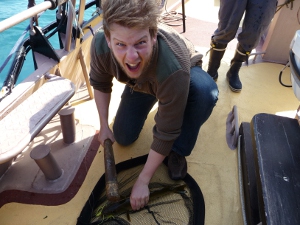 Earl John drew his club, which he called Cod-hammer or Mackerel-bane
And clove the fishes’ skulls in twain
With mighty blows
And sometimes into many pieces
So the brains ran out
And the scuppers ran red

Then Captain Su fried the fish in oil. So Oaf Neil made a verse:

“Swimmer of the black depths
Now they dance in hot oil
Sounds like waves on the hull
Golden gifts from Odin”.

And here ends this part of the saga of the voyage to Alesund.

Read Neil Ashdown’s first Saga Of The Passage To Norway written in 2011.

Neil is a highly valued member of our crew who has sailed several thousands of miles on Trinovante. He first joined the ship in 2005, earned the honorary title of ‘Oaf’ in 2006 and competed in the Tall Ships Races in 2008 amongst other voyages. You can get a glimpse of him perfecting the ancient art of appearing to be awake on watch in Paul Farmers 2008 Tall Ships Race Film ‘Bigger Than Yourself’.