The Saga Of The Passage To Norway By Neil Ashdown 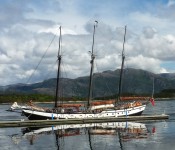 You can sail in the Norwegian Fjords on Trinovante this summer.

The passage from Ipswich to Norway covers around 650 miles and can take up to a week.

We had remarkably good weather for our sailing holiday. The Trinovante raced due north under a full press of sail. John and Su have a new sail this year – the secret weapon! Rigged between the foremast and the main, it fills in the lightest of airs and, as Su puts it, means an end to lazy fishing off the stern.

Wildlife Visits our Ship Far Out At Sea 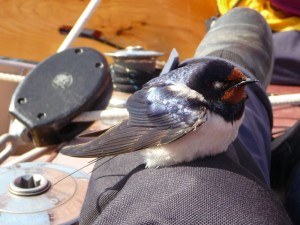 The swallow finds a handy perch on a crew members leg.

We picked up some unexpected guests during the passage, including Frank the Bat, Christopher Wren and Jonathan the Swallow. Then to top it all off dolphins joined us, dancing around the bows of the boat.

The north sea is covered in oil rigs. At night the horizon is ringed by their lights and the haunting blasts of their horns. Up close they look like cities raised on stilts, lit up like Christmas trees. During the day rig’s guard ships come close to admire the tall ship. Perhaps they want a bacon sandwich, said Crewman Mike.

Sailing By The North Star 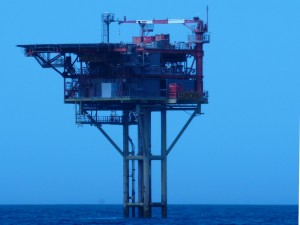 The days get longer as you head north and the sunsets become more impressive.
The night watch get the chance to sail by the north star; something most people only read about in history books. At two in the morning its easy to imagine our forefathers doing the same thing as they made passage – that said, the GPS is a quite a comfort!
(Oil rig)

Crewman Mike brought eggs from his chickens back home which made a fine breakfast at four ‘o’ clock on a cold morning in the North Sea. 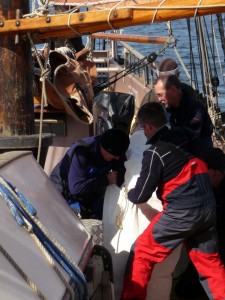 Three of the crew wrestling with the big light weight fishermans sail.

We made landfall on Friday morning but the coast of Norway was hidden behind a bank of cloud. At last, as the sun rose higher, the clouds lifted. All the long night watches and cold fingers paid off when we caught sight of the jagged blue headlands.

One of the high points was Hornelen, the tallest sea cliff in Northern Europe. Sheer grey rock rising out of grey waters to be lost in wreathes of cloud, its sides dotted with troll caves and tenacious scrubs.

Coming into Botnane we saw two great cairns of stone on either side of the entrance to the harbour. The man who took our mooring lines told us they were viking graves and so that evening the crew set off to engage in some amateur archaeology.

While we didn’t find any longboats or horned helmets, it was a
vivid reminder of the history of this part of the world. As we
tramped back to the boat a lone heron rose flapping from the
marshes. 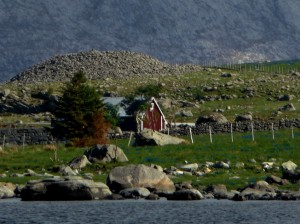 After leaving Botnane we went fishing in a fjord. The crew caught four saithe which fried up nicely and made a fine dinner on the picturesque island of Silda. We then caught sight of another fisherman – an eagle circling lazily in the thermals between the cliffs.

Before our fish supper the crew decided to work up an appetite by climbing to the top of the highest hill on the island.
The Norwegians take good care of their tourists and even at this time of year, out of season, the path around the island was well maintained, which
was a good thing considering how steep it was in
places. 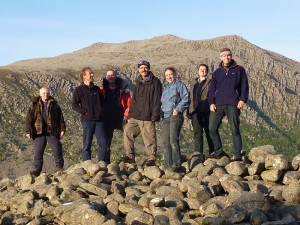 Some of the Ipswich to Alesund sailing crew

It was worth the effort though – the view
from the summit was remarkable, taking in Malloy
and the Stad headland. “I’m ready for my dinner”,
said Su on the way down. We all were.

You can check out availibility for the rest of our summers sailing holidays in Norway on our main web site at www.schoonersail.com