Windy Weather On Our ‘Learn to Sail’ Sailing Weekend 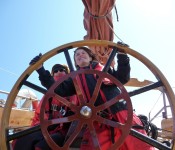 You can check out availability for our other sailing holidays and adventures on our main web site at
www.schoonersail.com

Our first sailing weekend of the year featured warm
gentle winds and blazing sunshine. This second
weekend was wild and gusty but still with blazing
sunshine – fantastic weather for us in a
larger boat. 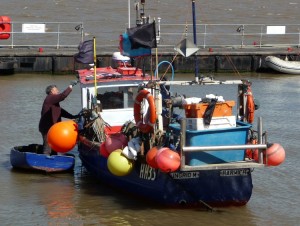 This fisherman opted settled for staying in harbour and doing a bit of painting over the blustery weekend.

Force 6 to 7 winds blew the whole four days our new crew were on board with the occasional force 8 gust. There were only a few, well reefed down, yachts out on the water to accompany Trinovante for this sailing holiday.

First Time Out Sailing On a Schooner

Several people on this crew had sailed before, one or two had extensive experience, but for a couple this was their first time learning to sail. Unusually three of our guest sailors had booked individually because they particularly wanted to sail on schooner and had found Trinovante’s sailing holidays on Google. 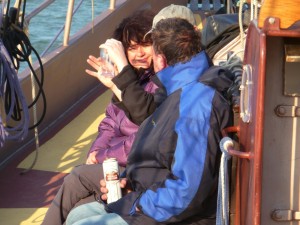 The blustery wind didn't stop some of our guest sailors from enjoying the sunset and a beer on deck.

We set off from Ipswich and anchored over night before sailing down the coast past Walton on the Naze and into the river Colne. It was a good chance to practise anchoring under sail. The crew had learnt enough by now to gradually reduce sail as we glided past a Thames barge sharing the same anchorage. Then it was time to chill out a mull over the days sailing.

It Doesn’t Take Long To Feel Like A Salty Seadog!

Trinovante is now sailing in Norway
As I post this blog we have already sailed to Norway and had a week sailing amongst the fjords and islands.
Several of the crew have written blogs about this so more on that as soon as we get time to post…