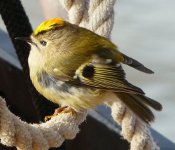 Two unusual airborn visitors sailed with us at the end of last summer.

The first was a Goldcrest which joined us several miles offshore, well away from its normal habitat. This is Britains smallest bird, smaller even than the wren and much more striking to look at with a bright, almost flourescent orange flash on its head. The RSPB bird book some of our guests kindly bought for us last summer said ‘it generally ignores humans and is not so much bold or tame as oblivious’. Certainly no amount of action on deck hoisiting and lowering topsails bothered it and the main issue was not stepping on it as it pottered about under foot.

The second visitor was a bat (obviously a bit confused) in broad daylight in the Walton Backwaters on the Thames Estuary. On a bright, sunny day, gently sailing in a warm breeze blowing off the saltings, the bat saw Trinovante and made a beeline for us. After trying to hide in a few unsuitable places around the deck it settled on snuggling deep inside the still furled foresail.
Many of us had never seen a bat so close up before and all the crew voted to let it be. The gaff foresail became a bat sanctuary for the rest of the day and remained folded. Any one seeing us out sailing that day probably assumed we were on some kind of sail training exercise with our strange, reduced sail combination. The following morning the bat had flown so we hope it survived.