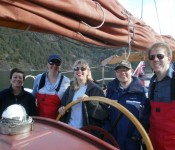 Sign up for our newsletters on our main web site to be notified when SchoonerSails 2012 sailing holidays itinerary goes online.
Trinovante will be sailing in Norway, Denmark, Sweden, the Netherlands and the UK in 2012.

This crew sailed from Bergen to Stavanger and have been prolific with their blogging. This blog has been split into two halves. Check out the first part here Our Norway Sailing Holiday – Or What The Guest Sailors Thought Part 1. 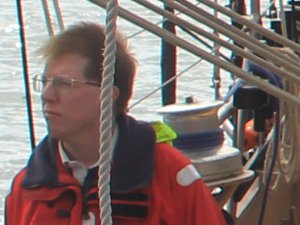 Stephen keeps the starboard side look out.

In Spring 2010, I joined Trinovante for a taster weekend sailing from Ipswich, after colleagues bought it for me as a leaving present, recalling a conversation where I said I would like to experience tall ship sailing. Although I’d only done a bit of dinghy sailing some years ago, I quickly felt at home and really enjoyed the experience. So this year I came to Norway with Lucy. I had only a sketchy mental image of Norway, and although I wanted to discover a little of the country, the primary draw was sailing on Trinovante. 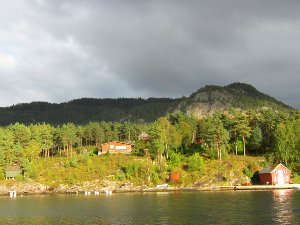 Evening light on a Norwegian landscape.

The sailing and the company were great, as expected – the real revelation was Norway, which was stunningly beautiful, an intricate mixture of mountains, fjords and islands big and small, wonderful colours, villages and hamlets nestled into the landscape, boats of all sizes scuttling about, all seemingly without end. I will be back. 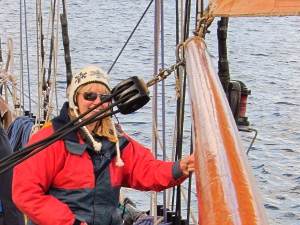 Lucy keeps port side look out.

Stephen recommended I join him on a week’s tall ship sailing on the schooner Trinovante; I was a little worried both about my physical strength and my fussy eating habits, and my almost total lack of sailing experience, but need not have worried. The lovely Su and John made us feel immediately welcome, and the cooking was absolutely wonderful! The group of lovely people we met very quickly became a great team, ready and willing to help each other out with bowlines, throat halyards, and of course the important things like tea and biscuit eating! 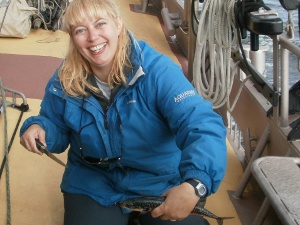 There was also the option to try out some mackerel fishing (see this crews blog about fishing), which I enjoyed hugely. Overall it was a hugely enjoyable experience, and I can’t wait for next year’s programme to be decided so I can choose my next trip.


Lucy previous experience – none.
Tea preference: no, no, no and no coffee either! Mug no 4
Biscuit choice: chocolate digestive, malted milk, kit kat, penguin, white Chocolate, milk chocolate, dark chocolate, shortbread, you get the idea….. 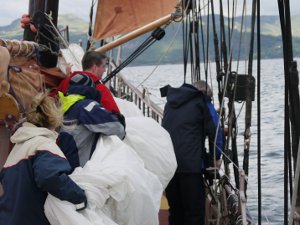 Michael and the rest of the crew getting the big fishaker sail down.

Having never sailed before and always wanting go on holidays in Norway, I found SchoonerSail and the trips read amazing. I decided to go without putting too much thought into it. I arrived in Bergen and joined John, Su and the rest of the crew onboard the Trinovante. John and Su were extremely welcoming into their boat which they build themselves by hand. It was one of the very best holidays I have ever been on. The places we visited were far beyond the normal tourist route and if I wasn’t on the sailing holiday I would never have seen the real Norway. Sundal was the most beautiful spot and to wake up to sunshine and perfectly calm water and a steady wind. Second
favourite was the mooring Økstrafjorden. 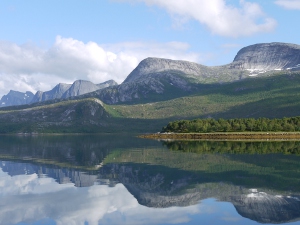 Oh yeah better not forget the sailing seeing as it was a sailing holiday. Amazing! Having never sailed before I was overwhelmed by all the ropes, masts and sails. We were quickly shown how to raise the sails, tie the knots and coiling the ropes clockwise in a perfect coil!!! We sailed every day, with very little motoring and thanks to the constant winds we didn’t have to switch the sails from port to starboard to many times. There was no fixed route except to arrive in Stavanger by 2 September. The plan was to sail where the wind took us which resulted in the maximum about of sailing. By the end of the week we were very nearly doing everything without the helpful hints from
Su and John.

I had a great time and made some wonderful new
friends. I look forward to returning to the
Trinovante for another sailing holiday on a
tall ship in the not too distant future. 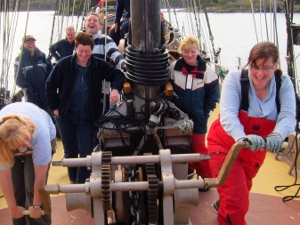 Claire, queen of the anchor winch giving it her all.

I was having a muse about what to do for my summer holidays this year. As a single person I was a bit fed up of feeling out of place in resorts full of happy couples and rowing families. Having already done a little bit of sailing on smaller plastic and traditional boats avoiding other plastic and traditional boats on the solent I thought it was time to go a little further afield so was very happy to find the Trinovante site on line. When joining the crew Su and John made me feel right at home (it helps we are all Essex folks, but sadly the white stilettos had to stay dockside!).

The next few days were spent learning the ropes (a few more than your average plastic boat), getting to know my fellow ship mates, admiring the beautiful Norwegian scenery and of course drinking copious amounts of tea. It was a great adventure and Ive made lots of friends on the way and I cant wait to come back next year to do it all again. Only downside is that Su’s fabulous cooking now means my jeans are a little bit tight. So Im off to the shops to buy some more 🙂 See you next year! 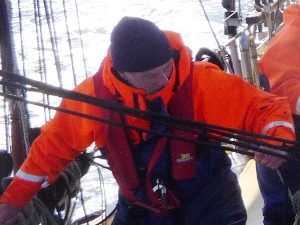 Roger is a bit camera shy so we have had to use this photo of him taken last year on one of Trinovantes offshore voyages.

After sailing from the Canaries to the UK via the Azores in the early part of the year on the restored West Country trading ketch Bessie-Ellen, in a vain attempt to find some winter sun, I initially thought I’d give Norway a body-swerve this year, but after the return to the UK, the pull was too strong. So, here I am, on Trinovante in Norway, for the fifth year in succession – I must be enjoying myself! Terra Nova this time though – Bergen and points south (rather than north to the Arctic Circle and the Lofotens), and ending up finally in Amsterdam. Although the places are new (to me), some problems remain the same – which sail do I prefer to avoid hoisting – a gaff topsail or a fisherman’s staysail? The jury is still out, and I may arrive at a
conclusion at some unspecified time in the future.
Watch this space… 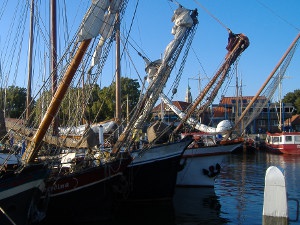 Traditional sailing boats in the Netherlands our next stop after Trinovante leaves Stavanger.

Amsterdam here we come, it’s twenty years since I was in Amsterdam and I’m really looking forward to that beer on the Damplatz!

Roger previous experience – quite a lot.
Tea preference: milk half a sugar, mug no 9
Biscuit choice: my own home made ginger biscuits