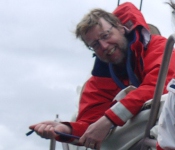 John sailed with his family on Trinovante from Alesund to Bergen in 2012.
They usually charter yachts on the West Coast of Scotland but found Trinovante online when looking for a tall ship sailing holiday and decided to try something different this year.

John, a Methodist/URC church minister who lives in Scotland blogs at Fullness Of Life where he muses on the meaning of life including, sometimes, God.
You can read more about John’s schooner sailing holiday on his own blog.

I must go down to the sea again: to the lonely sea and the sky
And all I ask is a tall ship and a star to sail her by
So I searched with Google on the Internet and found Schoonersail
I booked a plane, packed my wellies and set off on the adventure trail 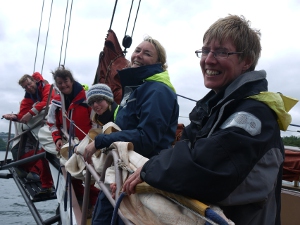 Hauling and sweating the halyards gave us biceps like King kong
And we felt a sense of achievement when we didn’t get things wrong
The ship sailed like a racer, speeding past the land,
The crew all learned the ropes becoming a disciplined band 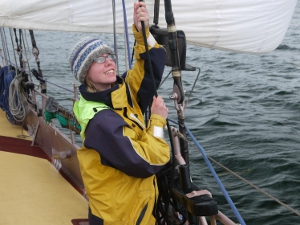 The sails went up, the sails came down and we tacked to and fro
As they went up we heaved and hauled and up we watched them go,
But when the fishaker was dropped it descended from on high
And engulfed the crew in sail cloth obliterating the sky

Able seaman Julie then cast a line over the stern
And within a minute her place in history did earn
For every time she dropped her line she caught a fine big cod
and she only had a mackerel line not even a fishing rod. 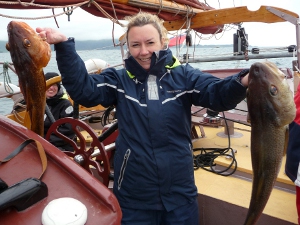 At last the end of the voyage drew nigh and Bergen hove in view,
All thoughts turned to going home and the jobs we had to do,
But in our dreams our schooner home ever more will be,
Roaming under sails (all put up right!) upon the wavy sea.