The Ten Precepts of Sailing in Snowdomia 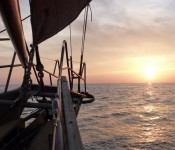 Inspired by a collection of snowdomes in a Harwich pub, Caroline a regular SchoonerSail sailor writes about the 2011 sailing holiday from Amsterdam to the UK. In previous years she has been on sailing holidays in Norway and crewed on offshore voyages.

Or have a beer and check out the wonderful snow dome collection yourself at the New Bell Inn, Outpart Eastward, Harwich, Essex, CO12 3EN 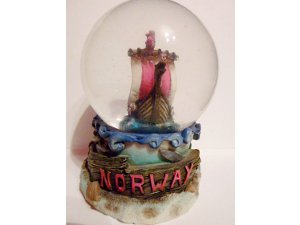 I first sailed on board Trinovante three years ago in Norway.
She was just what I’d been looking for: now in my late thirties, I had spent summer holidays of my late teens and twenties as a self-confessed “schooner bum” having become hooked on tall ships following a stint as a trainee with the Sail Training Association. (Indeed my grandfather probably sowed the seeds in my young mind as he was a volunteer Watch Officer on STA Sir Winston Churchill). 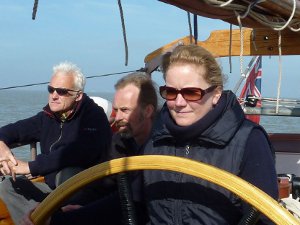 I soon progressed to Bosun’s Mate, then Watch Leader, so hooked I would volunteer on refits during my holidays which was a good way of getting to know every nook and cranny of the ships. Fun though those trips were, discovering Trinovante was a new delight: less regimented, more relaxed and on a smaller scale – i.e. more boat per person and shorter watches! Not to mention comfy bunks, excellent cooking, and Su & John’s relaxed attitude to sailing which belies their innate skill and a seamanship; it’s an attitude I find contagious. 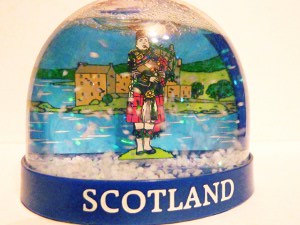 Stimulating conversation with strangers over a favourite tipple is part and parcel of a voyage on Trinovante and when I learnt there would be two Buddhists on board this year’s trip from Amsterdam to Essex, I knew I would be in for an interesting voyage (although I was concerned I might be denied the tipple!). Add to that mix an avid Patrick O’Brien-fan / tarot-card-reading-American, a jolly Brummie, a non kilt-wearing Scot and myself, we were quite a diverse mix but somehow we seemed to gel into a team almost instantly. That’s the beauty of being thrown together
to face the elements, at the mercy of wind and tides,
with a common goal of enjoyment and escapism. 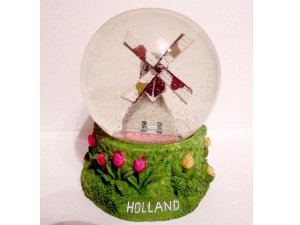 Our first stop was Holland – I think! I saw more of Schiphol airport than of Amsterdam itself because we spent our first evening bonding over a few beers (henceforth known as “precepts”) whilst learning of the ten precepts of Buddhism:


I understand to abstain from: 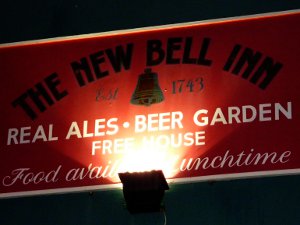 I admit I might struggle with the useless speech bit….  After a slow motor to the mouth of the North Sea eating Dutch apple cake, we set off in search of wind, which we eventually found – in moderation. The North Sea proved not to be the cold, grey, unforgiving sea I’ve been used to in the past, and we had a very fair crossing to Essex, and a much needed shower!
It was during “shore leave” in Harwich that we were guided by Su and John to the very splendid New Bell Inn. 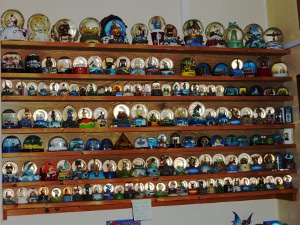 What a find! – a lovely pub that concealed a hidden gem, a veritable treasure trove: a collection of snow-domes. The friendly landlord even let us take them down and shake them like children. It was fascinating how so many of them could relate to the few days I had spent on board Trinovante – even the one from Jamaica reminded me of Su’s delicious home-made cooking topped with Reggae Reggae sauce! Of course it would’ve been rude not to linger over a few precepts while we were there… 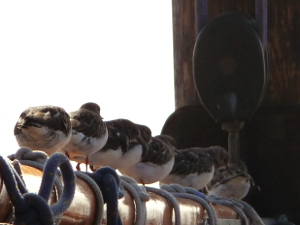 Following a morning fogbound in the surprisingly interesting port of Harwich, (where who would’ve guessed Samuel Pepys was once an MP?!), we headed south towards our final destination: the beautiful historic boatyard of St Osyth.
En route, we picked up and were entertained by some unusual hitchhikers in the form of a flock of tern stones who kept us from raising the sails. 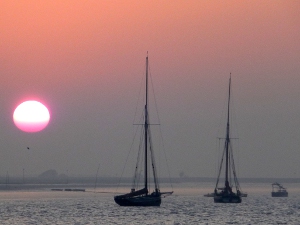 We passed wind farms whilst putting the fishaker up, taking it down, putting it up, taking it down until we could’ve done it in our sleep. We drank chai, ate curry, listened to a variety of music from Georgian choral music to Scottish folk. And most importantly we laughed, chatted, exchanged views, soaked up nautical tips from Su and John, learned the language of the sea and basically relaxed and forgot about ourselves. Another memorable voyage… I’ve no doubt I’ll be back for more…